Network Rail have approved one of our client’s railway measuring products. The ABT-7100 Track Geometry Trolley is a product from Abtus based in Haverhill. The ABT-7100 is a dedicated track geometry trolley capable of recording track gauge, cant, twist, distance and GPS positioning, as well as, providing the user with the opportunity to flag track defects whilst recording.

The ABT-7100 was developed from the highly successful ABT-7000 Abtus Max, which was designed by mechanical design engineers ‘Round Peg Cambridge’ in conjunction with Abtus. In 2016, Abtus approached Round Peg to help develop a new track measurement trolley to measure a phenomenon known as cyclic top.

The Abtus ABT-7000 is a measuring device which records cyclic top geometry while being pushed by an operator at walking speed. With a single track recording the Abtus ABT-7000 enables track engineers to quickly identify, measure and repair cyclic top faults and trigger points to ensure line speed is quickly re-established without the need for a TRV recording.

Cyclic top is a set of 3 or more equally spaced geometric wavelength faults which excite train vehicle suspensions (mainly freight), resulting in the risk of derailment. The main causes of Track TSRs (Temporary Speed Restrictions) are cyclic top faults, resulting in performance related delays to passenger and freight services. Network Rail must pay the operators to compensate them for disruption caused by TSR’s.

The Abtus ABT-7000 can be easily assembled using a specifically designed quick fit latch by one operator.

The device weighs 23.5kg which can be lifted onto to the railway track by one user, however if it is to be carried, it can be broken into three parts so that it can be carried by two people. The device features removable wheel arms and requires no tools to build or dismantle.  The controls can be easily rotated for reverse pass measurements and include a dead man’s handle. The Abtus ABT-7000 fits into a small protective case for transportation and storage.

Cyclic top track geometry data is transmitted from the measuring device to a windows device supplied with the cyclic top software. The software displays track geometry data including distance, cant, twist and gauge in real time. The cyclic top analysis can be viewed at the end of a measurement. The data is saved as a .csv file and can be downloaded into PDF for reporting and transferred to other devices using a USB flash drive.

Abtus specialises in the measurement and maintenance of rail-track and associated infrastructure. 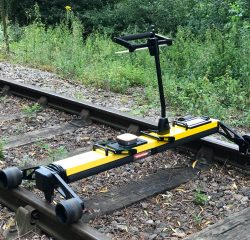 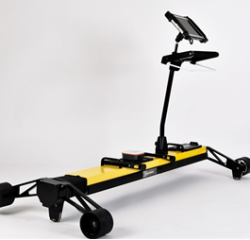 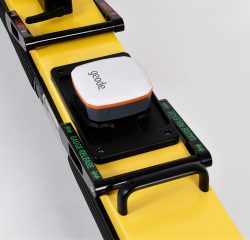 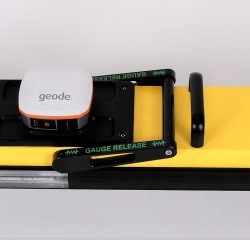