Evonetix are pioneering a radically different approach to DNA synthesis, based around a proprietary silicon chip that houses thousands of tiny reaction sites. By precisely controlling the temperature of each site and the flow of different liquids across the surface of the chip, Evonetix will enable scientists to synthesise DNA at scale and with greater accuracy than ever before.

Round Peg have been closely involved with Evonetix since the company was founded, helping to design, engineer and manufacture various elements of the surrounding assembly that allows this revolutionary chip to function, including temperature management systems to remove waste heat and the microfluidic “flow cell” used to control liquid flow. 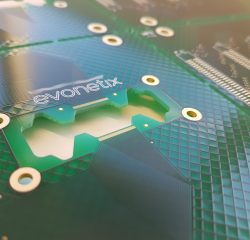 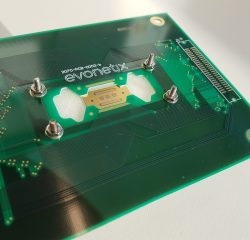 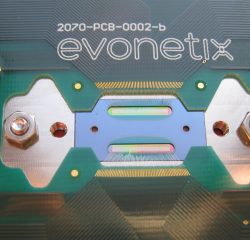 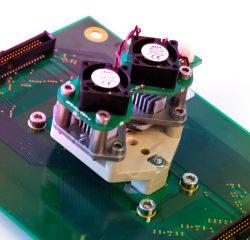 Anticipating problems
Over the course of our association with Evonetix, Round Peg’s role has steadily evolved. Having acted as a bolt-on mechanical engineering department in the company’s early days, we have been able to pass on lessons learnt to the growing in-house engineering function. In addition to providing outsourced design, manufacturing, parts sourcing and assembly services, Round Peg continue to provide advice and take part in brainstorming sessions with the Evonetix team.

It was in the latter capacity that we were asked to look at the design of Evonetix’s Short Loop 2 (SL2) module, based around a new version of their chip. We immediately identified a potential problem with the design, which had been supplied by the chip manufacturer. The design specified the use of temporary clamps to hold the chip in place while it was connected to the surrounding control PCB via wire bonding.

We saw that, between removing these clamps and mounting the assembly to the flow cell, it was almost inevitable that the chip would move, potentially damaging the network of extremely fine connecting wires.

We quickly hit upon an ingeniously simple solution. By making the hole in the centre of the PCB slightly smaller and seating the chip slightly proud, we were able to use the flexibility in the PCB substrate itself to clamp down on the edges of the chip and hold it firmly in place. This not only ensured that chip would not move after being connected, but also reduced the overall parts count and simplified the assembly process.

Outsourced design
In the event, Round Peg went on to design the rest of the SL2 platform, which incorporates a sophisticated array of miniaturised fans and heatsinks and a flow cell constructed entirely from chemically inert materials such as PEEK and Kalrez.

Evonetix’s Chief Technology Officer Matthew Hayes says: “Outsourcing allows us to scale up in the short term to meet the needs of the project. But we don’t like spending lots of time bringing contractors up to speed, only to lose that investment when they go on to their next job.

“The long-term relationship we have with Round Peg gives us continuity. They’ve been there from the start and they’re as expert in some of our technologies as we are ourselves. Their experience is invaluable in the planning stages of a project, then when the time comes to implement it we have total confidence in them to go away and actually make it.

“That takes the workload of us and means we can scale up and scale down without having the retrain someone from scratch.”Matthew Hayes, Chief Technology Officer, Evonetix