Aveillant’s proprietary 3D holographic radar represents a step-change in radar technology. While conventional radar sweeps across the airspace with a narrow beam, a bit like moving a flashlight around in the dark, Aveillant’s holographic radar illuminates the entire field of view so you can see everything, all the time. The technology has a number of key applications, most notably the detection and tracking of drones and other small unmanned air systems (UAS).

Round Peg have worked closely with Aveillant since their inception, playing an integral role in developing their technology from concept to finished product. So when Aveillant needed to revisit the design of their Gamekeeper counter-UAS radar to facilitate easier shipping, it was natural for them to turn to us. 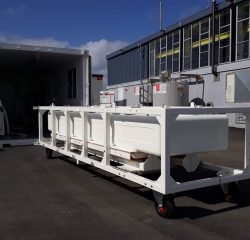 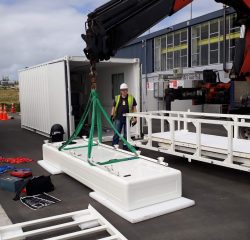 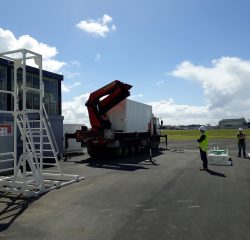 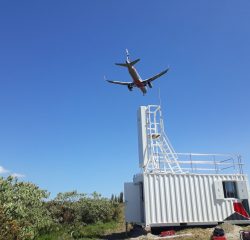 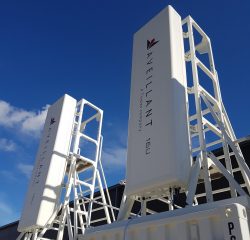 Thinking outside the box
For some installations, the Gamekeeper is mounted on top of a shipping container housing the associated processing hardware, generator and other equipment. For previous deployments within mainland Europe, Aveillant had simply been able to put everything on the back of a lorry. However, an urgent order from New Zealand meant shipping by air, creating a whole new set of packaging requirements and a need to reduce overall volume to mitigate the considerable additional cost of air freight.

Aveillant initially asked us to devise a way to segment the Gamekeeper’s mounting frame so that it could be safely stored inside the container, but we immediately saw the potential to go a step further. Rather than simply split the existing frame, we realised that it could be redesigned to disassemble and then reassemble as a cradle to hold the Gamekeeper securely during transit.

“When Round Peg came up with the idea,” says Aveillant’s Operations Director Bob Wade, “it was one of those moments where you just stop and think, what a good idea!”
We developed the design further so that all the elements needed to construct the frame and bolt it to the container could be flat-packed and bolted into the same cradle. The end result is a self-contained stillage mounted on four casters that can simply roll on and off the shipping container. When the Gamekeeper is reassembled at its final destination, the only parts left over are the four castors.

Exceeding expectations
Originally conceived as a one-off solution to a pressing problem, the “flat-pack” as it has come to be known is now part of the product line. Costing only slightly more than the fixed version, the flat-pack can be safely shipped anywhere in the world at drastically reduced cost.

“What Round Peg are really good at is interpreting what we want, understanding what we’re trying to achieve, and then delivering more than we’ve asked for in a very elegant way,” says Bob Wade. “They feel like part of the company – they live and breathe our projects. I know that, if we hit a problem, I can pick up the phone and they will come straight back with a solution.”

“Round Peg feel like part of the company – they live and breathe our projects.”
Bob Wade, Operations Director, Aveillant